catching up with Anna Murphy & Cellar Darling | May Day

Published on Aug 12, 2016
**** 'Mayday', along with the extended version of my debut album 'Cellar Darling' (includes 'Mayday' and the Tommy Vetterli remix of the song 'Cellar Darling') will be available SOON on the digital music service of your choice. Both are available NOW at Bandcamp: https://annamurphy.bandcamp.com ****

As promised, I am finally ready to share a new song from my solo project with you:

Mayday is about living in the moment and doing stupid stuff. It is inspired by my constant search for chaos and the consequences of it. Musically it features my most authentic approach so far as well as a perfect band consisting of Marco Jencarelli (guitars), Ivo Henzi (bass) and Merlin Sutter (drums).
It is honest, sarcastic and provocative.

The song was produced by Marco Jencarelli and myself at Soundfarm studios in Lucerne, the artwork is done yet again by me with photography by Merlin Sutter.

The lyric video was produced by myself and Merlin Sutter. Recorded in one take and terribly hungover, that's some real Mayday action right there. I am fully aware that there will be lots of funny screen shots taken after this and I'm ready to face the consequences.

I can't wait to play 'Mayday' live for the very first time in Australia later this month, together with my live band featuring Ivo Henzi, Merlin Sutter and the Rafi Kirder:


From The Studio... [Official Studio Footage] - YouTube
Published on Aug 29, 2016
We can't wait to finally share some music with you. Don't want to miss it? Subscribe to our channel here on YouTube, and like/follow/subscribe at: 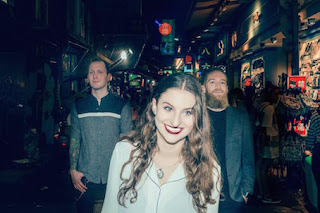 Swiss heavy metal goddess Anna Murphy is returning to Australia next month as a solo woman! Her recent departure from Celtic-metal outfit Eulveitie was a huge devastation amongst fans but the ethereal songstress has used it as an opportunity to fully explore her unique and powerful brand of eclectica. We caught up with the hurdy-gurdy superstar to discuss life after Eluveitie, the upcoming mini-tour, and comic book villain obsessions...
Interview with Anna Murphy (Cellar Darling, ex-Eluveite) Amnplify
A couple of months ago I met up with Anna Murphy, Ivo Henzi and Merlin Sutter ahead of their last ever show with Eluveitie in Sydney. It was a great chat back then, but ever since I’ve been looking forward to talking to the trio again, to see where their musical path is taking them post-Eluveite. I phoned up Anna last week for what turned out to be another very pleasant chat. Don’t miss them all when they head down to Sydney and Melbourne later this month, it will be two awesome nights of beautiful and heavy music! ...

[INTERVIEW] ANNA MURPHY - SOLO DIRECTION - HEAVY Music Magazine & Website | Rock, Metal, Thrash & More
At a young age of 26, Anna Murphy has pretty much cemented herself as a veteran in the worlds of Folk and Celtic Metal. When she was 16, she left home and joined Eluveitie, originally as their hurdy-gurdy player, a band that has risen to the heights of becoming one of the most recognisable artists in the folk metal genre. On top of that, Murphy has kept herself busy by joining other bands including Frakmundt, godnr.universe and Nucleus Torn as well as becoming a recognised audio engineer and launching a successful solo career...

First Review of The Tumbling of Creatures | Cliff Stapleton 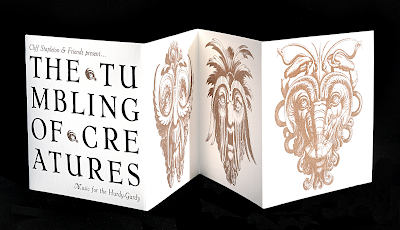 On the 20th August, a review of The Tumbling of Creatures by Uwe Schneider was published in the alternative arts Berlin online magazine African Paper
africanpaper.com/2016/08/20/cliff-stapleton-and-friends-the-tumbling-of-creatures/
A translation into English by Marie-Laure Royds:
CLIFF STAPLETON AND FRIENDS: The Tumbling of Creatures
The hurdy-gurdy has the reputation of being a rather antiquated instrument but in reality it has left its marks in many types of music, modern ones as well as more traditional ones. Since the Middle Ages, it has spread in courtly and popular contexts and today we see it used in a whole palette of musical orientations, from contemporary folk to rock music, including the so-called modern classical music.
Few artists embody this multiplicity as strongly as the Englishman Cliff Stapleton who, coming from the folk but also from the theatre scene, has found his way as far as in the experimental areas of dark electronica. He has played on stage and in studios with acts such as Coil, Thighpaulsandra and Cyclobe, amongst others, but up to now, here in Germany, we didn’t know much more about him than the fact that he is not related to Steven Stapleton. His CD “The Tumbling of Creatures. Music for the Hurdy-Gurdy” offers a solid selection of music pieces that Cliff Stapleton recorded over the past twenty years or so in different constellations – with bands, in temporary collaborations and, on one occasion, as a solo player.
One main part is made up of recordings with bands belonging to the folk scene in various forms, many of which present a very danceable variation with a slight renaissance streak, like Angles’ trance-inducing “Kicksy-Wicksy”. The essentially earthy tune “Huckle-Duckle” from Primæval contains influences of Breton music. The two pieces by The Drones, and the contributions from Blowzabella (that really make you want to sway at times) and the Duellists combine this with an underlying drone sound that is naturally produced directly from the drone strings of the hurdy-gurdy.
The second half of the compilation is dedicated to Cliff Stapleton’s experimental enterprises, and the spectrum slowly moves into the realms of the innovative and improvised in various shapes and forms. For one you have the phantasmagorical tune “The Labyrinth” with Bron Bradshaw, who accompanies him on a bouzouki*, with occasional Irish variations, and slowly develops a melody that just sticks in your head. And then there is the disarranged, including an impro-trio with Sylvia Hallett and Clive Bell. His one-minute solo track “Scent” also belongs to this mood, basing on an ostensible drone with a truly one-dimensional effect and in the crannies of which lurks something very minimal. The readers of our pages will most likely be more familiar with his contributions to Cyclobe and Coil. “We’ll Witness the Resurrection of Dead Butterflies (Three Moons)” by Cyclobe features Cliff Stapleton’s hurdy-gurdy more than any other piece from the “Wounded Galaxies…” – our reviewer describes it appropriately as “incredibly dense” and he draws parallels with Coil’s (comparatively subtly disturbing) album “The Remote Viewer” which features on the CD with a representative extract of their first section.
At the end of a good hour’s music, it remains among other things the impression of a great transformability, which is not necessarily just due to a wide spectrum of playing styles but simply to Cliff Stapleton’s art of connecting, through his repertoire, with the most varied situations in a perfectly natural way. Thanks to the unique tone of this instrument (which the untrained ear would always find slightly exotic), he has given to all these projects an unusual overtone, which will carry particular weight for those electronic bands who are very distant from early music.
* The bouzouki mentioned is a hammered dulcimer  [CS] 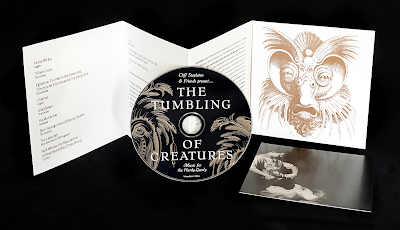 
This edition comes in a deluxe, four-panel, handmade concertina-style wallet, silk-screen printed in copper and black ink with a card insert.

The Tumbling of Creatures - Cliff Stapleton 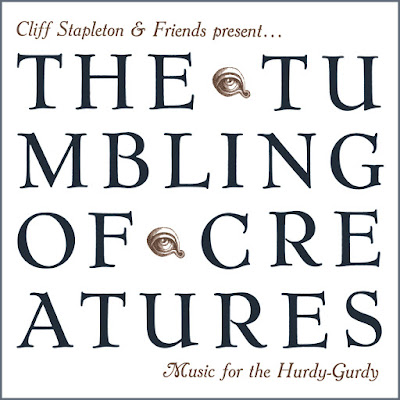 Cliff Stapleton & Friends Present…  The Tumbling of Creatures: Music For The Hurdy-Gurdy
"I have chosen 12 unique musical tracks that have been recorded over a 30-year period with bands and theatre companies. The compositions, the order of tracks and the interplay with other artistes show a sense of story of my creative life with this remarkable and ancient instrument, the hurdy-gurdy." 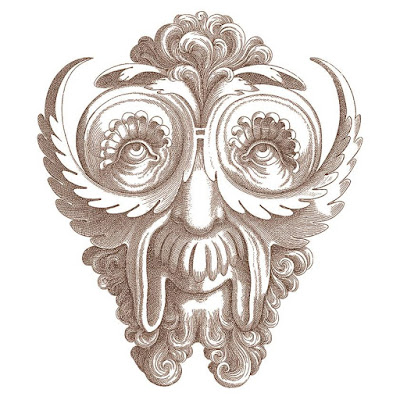 
This edition comes in a deluxe, four-panel, handmade concertina-style wallet, silk-screen printed in copper and black ink with a card insert. 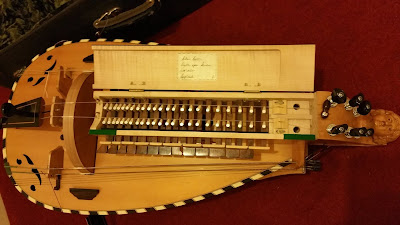 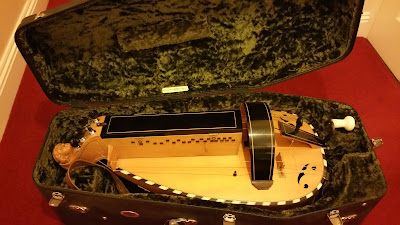 Email ThisBlogThis!Share to TwitterShare to FacebookShare to Pinterest
Labels: Chris Eaton, for sale

FOR SALE: Prototype “Vio” Hurdy Gurdy €2700 + P&P from Germany
VIDEO: https://youtu.be/64tBFikP3SM (Black Rock, by Cliff Stapleton)
This is the twin of my current personal instrument, originally built four years ago but finished recently. The video was taken after only one day of setting up and breaking in, so it’s a bit scratchy, and intended to give an impression of the raw sound of the instrument (both acoustic and from the two internal pickups), ready for you to tame (or not, if you prefer!)
The instrument has three chanters (currently G, d and g), two drones (currently C and G) and two trompettes, also C and G. The C drone and trompette are fitted with capos, raising the pitch by one tone. The chanter bridge height is adjustable.
The instrument is fitted with two passive internal pickups, one on the soundboard below the bridge giving a good overall sound, and one on the chanter bridge itself, giving a very focused chanter sound (almost no trompette!). The sounds from both pickups can be heard in the video. There is one jack for each pickup, enabling you to mix them or apply separate effects exernally.
The whole body is made from flamed maple, the keys and other small details are ebony, with screwed wooden tangents. The instrument is a prototype, and therefore has some minor cosmetic and design flaws; otherwise it is a fine, working instrument at a special prototype price.
I’ve already had some interest in the instrument and am waiting until Monday for a potential buyer to get back to me, other than that it’s first-come-first served. Any questions, etc. comment/message/email me barnaby@waterpigs.co.uk
(originally posted at https://waterpigs.co.uk/notes/4in8FM/)
CONTACT: barnaby@waterpigs.co.uk 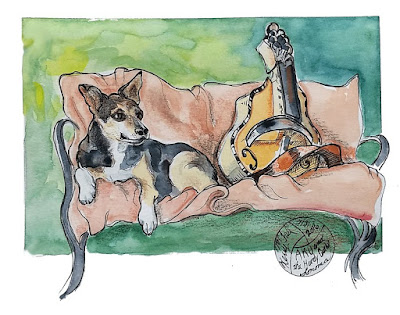 my best friend and my gurdy :)


art by my cousin Kerry McFall – a new post on her blog at www.gallerynouveau.biz features "Aku the Hurdy Gurdy dog!"

I learned on our recent visit to Sonoma that my cousin Rob is a big fan of Hurdy Gurdys – wait, what?  A hip graphic artist guy in NorCal, into yoga and not into gluten, and his true passion is a Medieval instrument that sounds like a collision between a bagpipe and an electric keyboard and a Tennessee fiddler?  I am always fascinated by what inspires the passions that drive people’s lives.

The instrument itself is beautiful...

Email ThisBlogThis!Share to TwitterShare to FacebookShare to Pinterest
Labels: art

taking the week off due to neck problems

UPDATE – 18 AUGUST: i had hoped to restart, but find that i need to just postpone all publications for awhile.

~ One edition published since, on 31 August.


NOTE – 1st AUGUST: the paper usually updates each Wednesday/Thursday, but i am having a hellish time with my long-injured injured neck, and will not be updating the paper.


For your entertainment in the meantime, here are some links –

• Facebook ( thank you for liking! / please invite your friends! ):
facebook.com/HurdyGurdyWeekly

• All posts on this Blog for July